A great Blend of Power & Symphonic Metal hits the spot for me. I enjoyed listening to this album from the first play good Melodic vocals, and drifts in and out of both Power and Symphonic Metal. The only things that disappoint are the Vocals of Fabio Lione don’t blend well on The Last Resort track, and the last track A New Dawn Ending, may take a few plays to get use too, as it’s 16 minutes long with narration and growling vocals, and doesn’t flow as well as the other tracks. The opening track gets a low score only because it is a narration followed by a short opening instrumental sound track.

Overall an enjoyable album for both Power Metal and Symphonic fans to listen too. Ancient Bards have struck a good medium between the two styles. 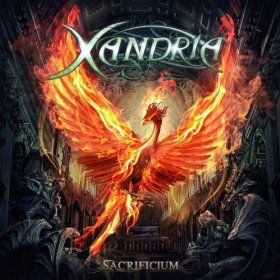 A Second Special Edition CD holds Instrumental Tracks of the above titles except for the first track 13. The Watcher (4). So if you like Two Steps From Hell type of productions it might be worth you shelling out the extra for the 2 CD set.

New vocalist Dianne Van Giersbergen does a good job in fronting the band with pleasant  melodic vocals, and the sound production has gone up a notch with this album, and it adds to an enjoyable Symphonic Metal album that gives Nightwish a run for their money. There’s lots of prominent orchestrations and plenty of choirs beefing up the whole sound. I think this is my favourite Xandria album after only a few listens. Stand out tracks for me are Stardust, Betrayer, Nightfall, & Temple of Hate. The opener of the album Sacrificium starts off  like some film soundtrack and sounds like an extension to a Two Steps From Hell track, is a bit over done running for 10mins.

After the disappointment with the new Epica and Delain albums this has restored the Symphonic Metal balance for me this year, and it could well creep into my top Ten albums of this year with a rating of 4.5/5